Posted: September 20, 2020 Under: Uncategorized By RobbnLiz No Comments

Highway 32 from Ashton, ID to Tetonia, ID is a terrible road for pulling a trailer.  The highway is a very winding road with extremely narrow lanes.  There is no shoulder at all and the read surface is very uneven, creating unpredictable behavior from the trailer.  It was a pretty tense section of the route we had to travel to get to our destination in the Tetons.

The smoke situation got worse as we travelled.  Jackson was at about 142 AQI when we arrived.

Well that was exciting!  Holy Cow!!  10% grade, with the compression brake, the brakes on the truck got REALLY hot.  Liz was pretty much white knuckles and she was in the passenger seat, so needless to say, the driver was a little tense as well. 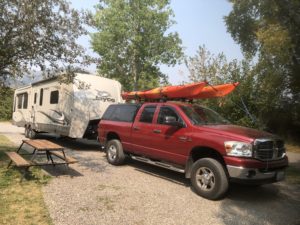 On our first day of our short stay in Jackson Hole, we took the tandem out for a ‘spin’.  We rode from our campsite into Jackson.  Jackson has an amazing paved bike trail system which includes a paved trail all the way to Jenny Lake, which is 20 miles from Jackson.  Our plan was to ride this out & back once we got to Jackson.

Navigating through Jackson with the map we had was a bit confusing, so we stopped at a bike shop , The Hub, for more information.  The gentleman at the bike shop was very helpful.  Turns out he was from Boise, and we discussed our next destination bit.  He was very helpful directing us to the Jenny Lake Trail.  He did however suggest we may want to try the Moose-Wilson Road on our return as it would be a shorter route to the RV park.  Well, that may not have ben the best suggestion we have ever gotten.  More about this later.

The ride to Jenny Lake was nicely paved and fairly flat, generally uphill all the way out, but very low grade with the exception of a few small climbs.  We met another coupe on a tandem from Grants Pass, OR, and spoke briefly.

Arriving at Jenny Lake, we found all three parking lots packed and cars parked along the road for about a half mile each direction.  We elected to not try to see the lake at that time and started our return.

When we arrived at Moose, we did take the Moose-Wilson road.  That was…interesting.  The road is extremely narrow and winding with LOTS of traffic.  Then about halfway through, it turns to gravel.  The bike shop had told us there was a short gravel section, but it was only about a half mile and was in great shape.  He then said well maybe it’s more than a half mile.

In reality, it was about 3 miles and definitely NOT in good shape.  More white knuckles.  Anyway, we finally reached the pavement again and finished our ride at 50 miles. 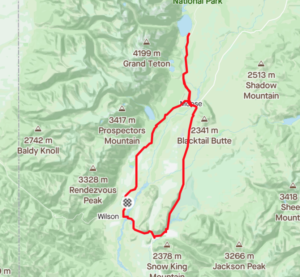 We headed to String Lake the next day for kayaking.  As we came to Jenny Lake, we decided that since we were earlier in the day, we would check the crowds.  The parking lots were nearly full again, but we managed to find a spot to park.  when we got to the viewing area for the lake, we walked the discovery trail back to the parking lot.  On the way we passed the boat dock where people take a shuttle across the lake to hike in the mountains.  We now realize why the parking lots are so full all the time.  There was a huge line of people waiting to get on the shuttle boats.

String Lake was amazing.  The lake is absolutely pristine, and right at the base of the mountains.  There were not many other paddlers on the lake, and no power boats allowed.  The lake is quite narrow and long.  You can portage from String Lake to Leigh Lake.  Apparently that is the only way to access Leigh Lake.  We elected not to do that as String Lake had a lot to explore.

After our paddle we chatted briefly with an older gentleman with an inflatable kayak.  He had done the portage and said Leigh Lake was beautiful.  Much deeper and blue/black hues to it.

Jackson is a great little town, but the traffic here is HORRENDOUS.  Getting into town is congested, but getting out of town is insane.  Our experience was that anytime we were in Jackson, it took a minimum of 30 minutes to get out of town.

The town itself is clean and quaint in the downtown area, with some rather rough areas on the edges.  It is without question a tourist town, surprise!  You can expect the typical galleries, gift shops, ice cream parlors, and restaurants that most upscale tourists towns will have.  Basic amenities such as grocery stores can be found, but do not look for Home Depot.

Real Estate and accommodations are absurd.  When researching for an RV park in Jackson, I saw prices as high as $200 a night for a campsite.

Jackson Hole and the Tetons are beautiful.  We would like to come back to this area when we could have a little more time and it is not so smokey. We would have liked to do some hiking in the area and see things like Mormon Row.  The smoke and haze were thick enough that it would not have been worth trying things like that on this trip.