We thought we had seen the Bryce Canyon area, we were wrong! When visiting Bryce Canyon the most popular attractions are in the boxed area on the image below.

That area is where the shuttle runs and where the Multi-Use Trail goes. We were looking at the map and thought it might be fun to just drive to the south end of the park and check out the view points. We were not disappointed! The rive was really enjoyable as the traffic beyond ‘THe Box” was fairly light and we were able to drive at a moderate speed and take it all in.

The viewpoints include Swamp Canyon, Piracy Point, Fairview Point, Natural Bridge, Agua Canyon, Ponderosa Canyon, Black Birch Canyon, Rainbow Point, and Yovimpa Point. We stopped at all of them and were awed at each vista. The views in the south end of Bryce are more localized in the formations and hoodoos, while at the same time the vastness of the area is pretty more apparent. The contrast of the hoodoos and red rock against the back drop of the valleys really illustrates the amazing colors we have been seeing in this area. The elevations were significantly higher reaching 9115 feet at Rainbow Point.

And the Prairie Dogs

We did stop for a bit and watched the prairie dogs. While being nearly impossible to photograph, they were quite entertaining. the problem with trying to capture them in am=n image is that they are small enough and far away enough that a long reach lens is needed. Well, they are so quick to pop up and down that by the time you can locate them in your lens field of view, they are gone. Anyway, although we only got a couple of rather lame shots, it was a lot of  fun watching them.

When we pulled into the Fairview Point parking area we came across a food truck! 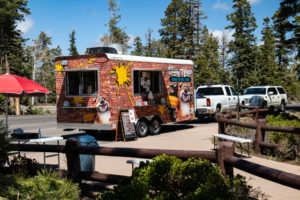 It Was A Good Day

We were so glad that we had decided to check out the drive beyond “The Box.” There is so much more to the area than what we thought. When we look back on our visit to Bryce Canyon, this will definitely be a day we remember!